July – August 2016 Yellowstone County, Montana
Near an alkaline bed/field and a small group of homes there has been some weird, unexplained things going on. This encounter/sighting was reported to MonDak Fortean Research by a husband and wife, the husband just turned 30 and the wife is still in her 20’s. I have yet to make contact with any other neighbors that reportedly co-witnessed/experienced these events.
The Video below is from the husband, there was a massive thunder/lighting storm to the East of their location. Notice the lights on the horizon, they appear to be going up instead of down. While this is actually what happens, the part that goes up is invisible to us humans, the part that comes back down is the visible lightning strike. I found this tidbit of info from the people that know about the weather, The National Severe Storms Laboratory, part of the National Oceanic and Atmospheric Administration, which is part of the U.S. Department of Commerce. http://www.nssl.noaa.gov/education/svrwx101/lightning/faq/
Here is the video as emailed to me:

I could not isolate any anomaly in these parts of the video, the screen is just too dark. The anomaly that I did isolate is in this picture right here. 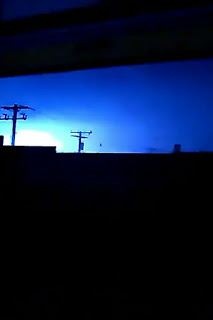 This picture is two frames before the one containing the anomaly, the frame between is too dark. I cannot see anything in this picture. 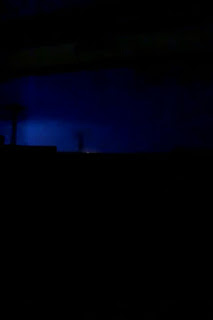 This picture is a zoomed in version of the anomaly… 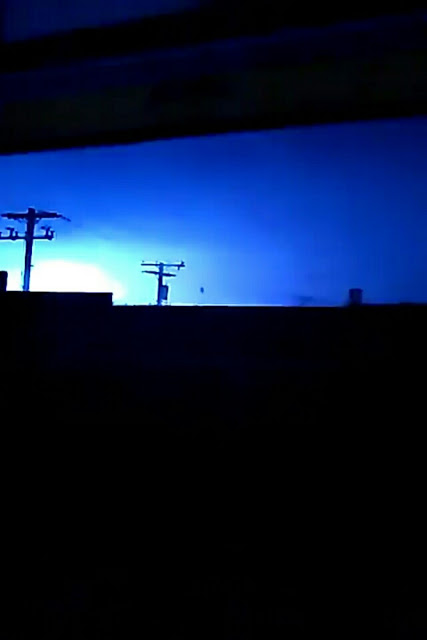 Yes it is pixilated, but since I’m just starting out, it is the best I can do with what I have. The one thing that I noticed is that the power pole and the object in question both of the same type of outline. From my limited experience, it appears that the video was not tampered with, it is just what was caught using his cell phone.
If this wasn’t weird enough, the witnesses have stated that there were numerous shadow being encounters, not the “typical” shadow man/hat man being, but something that is not quite here/able to manifest itself in our realm/dimension. The wife took a picture, was there was something there? At the minimum she thought she saw something, whatever was happening it was enough to prompt her to take the picture. Take a look in the upper right of this collage of pictures. 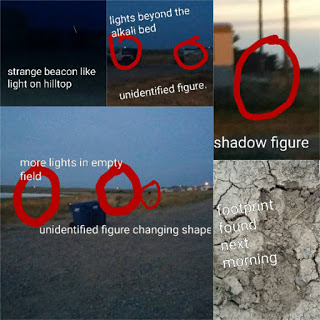 What the wife stated was that multiple people witnessed these events and beings. She also stated that her neighbor (with bigger stones than I) walked up to one figure/being. She said it took a swing at him when he got close… She also heard footsteps within an estimated 2 feet and felt the air change around her when a being came close, it was not visible but she knew it was near her. They have witnessed the top wire of the barb wire fence on the property line being pushed down like someone/something crossed the fence.
The husband said that where ever these beings were, any exposed dirt and gravel ends up highly pulverized. The area also had the smell of ionized material, similar to the smell you get when you supercharge a magnet.

The only thing left behind was this strange footprint left in the alkaline bed… no normal human could make this impression when the ground is dry. This is the lower right hand corner of the collage.

No missing time was reported, no abductions were reported, but these strange lights in the sky and a hard to describe being encounter.
Posted 23rd August 2016 by MonDak Fortean Research

Other than being the name of a Ghost Town located in Roosevelt County on the border of Montana and North Dakota, it is historically considered to be parts of Eastern Montana and Western North Dakota. On a map, the larger area is from a line North/South of Billings to Lewistown to Havre East to a line North/South of Bismarck to Minot. If the northern tier of “flyover country” could have a “flyover country”, the MonDak would be it… the area’s only really claims to fame is two of the top 5 of the largest reservoirs (Lake Sakakawea and Fort Peck) and the oil play known as the Bakken Formation. Most of the “population centers” in Western Montana and Eastern North Dakota only put up with this region is the vast amount of coal and oil reserves that bring revenue into the respective states.

MonDak Fortean Research was started in November 2015 by a Retired USAF member that lives in Eastern Montana. After a few paranormal experiences in his adult life, he decided to pursue the world of forteana, strange phenomena, unusual events or the unexplained such has crop circles, mutilated cattle and/or weird/interesting entities. Yes it is a broad net, but he refuses to “stovepipe” himself into one area of study.

When The Dead Speak

When The Dead Speak