The Haunted Air Base and Other Creepy Tales…

Thanks to Pete for sharing these personal encounter stories.

I will start off at my youngest for chronos sake…

Back in the early 80’s my Mother was going to school. She would go to school during the day and would usually take me as a wee lad. My Father worked nights so someone typically would be at the apt. This particular apt bldg (which eerily we lived downstairs from Ted Bundy) had been built in a horseshoe shape and faced East towards the Wasatch mtns (maybe 2-3 miles away). Two stories w/the first being built into the ground so if you walked out the door, your chest would be ground level whilst the second was a mere 3′ (approx.) off the ground. The parking/driveways went along to the N & S ends to the parking area located in the west end. So one night, i was taking a bath and playing as kids do. When all of a sudden I happen to look up & to my right to see a face looking in the window. These particular window was about 8″x12″, a few inches off the ground and located along the S end road that led to the parking area. This face was white, black eyes and maybe a sliver of a mouth…I don’t remember the particulars (also the glass was that wavy/smokey/blurry type), but I remember the actions. It tilted it’s head to one side, then back up and shimmied between the two positions. Being that young I was too little to be scared. I thought it was someone playing a trick on me, which it may have. However, I remember the face was not a person’s. After I finished I went into the living room and asked if anyone had been playing a trick on me. To which no one and to this day has ever fessed up to it. 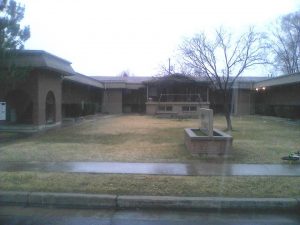 Our Apt was on the lower, left side and just before the wall. TB’s was upper and towards the back. In the dark ironically.

Fast forward to the mid 90’s and my teenage years. This particular town is next to a military base and north of that there’s a wildlife refuge. Being an artillery base coupled with a refuge, there is prime real estate for creatures of any type to roam through the town, through the base and into a healthy feeding area that is the refuge (long horns, bison, cows, etc…). So one day my friend and I decided to go play in some gutters which were adjacent to the military base. The road that separated the base/town was closed so there was excellent resources to do what kids do. On this particular day my friend and I were walking back home (the road was particular to the base separation road) and had to pass near a small patch of woods. As were walking we could hear something moving through the bush. When we stopped it stopped. When we moved it moved. Unable to see anything we tried this a few times to try and determine if it was someone messing w/us or some animal. It wasn’t long before we got spooked and took off back to the house about 1/8th a mile away. Uneventful and uninformative in and of itself, but what happened a few years later makes me wonder…

This encounter took place in the summer of ’94 or ’95. As a kid, teenager and adult I’ve always preferred the dark. However, it wasn’t always so. In my childhood we used to have heater that required the smallest person (me) to go down into the basement and light the pilot light. Yet this particular basement was filled up with dirt, to within 2′ from the ceiling. So from a very young age I had to conquer my fear of the dark. On this particular night and with it being summer, I would stay up all night and sleep during the day. I would do my best to creep myself out by watching VHS copies of In Search Of… or whatever happened to be on the tube at that hour. These particular apartments were the 8 apt’s per building type. Double stacked, four on each side and joined together by a single roof and a type of patio on the 2nd floor with stairs in the middle. The stairs were concrete along with the passageway so any sound would easily bounce around and make it hard to be quiet. The yellow eerie light bulbs did nothing to dispel the uneasiness of this place.

So there I was, still awake for no particular reason. I was going to lay down on the couch, when I could hear someone/something moving around outside. Being suspicious at this hour I put my head next to the door trying to get a clue as to who was out there. What I could hear was breathing! Whatever this thing was it sounded huge! When I would tell this story to my friends years later, I would say it sounded like it had that deep, heavy breathing similar to a large dog. But this sounded much bigger. Dare I say the word, guttural (I despise that word thanks to Finding Bigfoot), but that would be the most accurate description I have right now. Whatever this thing was, it was outside, just on other side of the door. We had one of those heavy front doors, but I don’t think it would’ve held up. The kitchen window was about 3′ from the door and it had white Venetian blinds (so the light easily passed thru), but I dared not look out. If I didn’t think that door could stop whatever it was, then a little piece of glass sure as hell wouldn’t. I don’t remember how long it lasted (probably 2-3 minutes), but I moved as slowly and quietly as I could the rest of the night. I don’t think I slept at all the rest of the day. I don’t remember how long it took me to tell my parents, but that wouldn’t be the last time we would see/hear things (and I hardly, if ever see anything) from those woods next to the complex. And those make for even spookier tales.

Oddly enough, the creek behind the apartments is called Wolf Creek.

Okay, fast forward quite a few years to 2003. This happened in Kuwait. This is where the majority of Marine Squadrons were based. A few other smaller “bases” were established throughout Iraq, in the beginning of the war, but the majority of the maintenance was done here. It was until years later that major air stations were established. Anywho, This happened around Aug – Sep of ’03 during the major draw down. The majority of our unit had left and a ever shrinking crew stayed behind to maintain things. With all hundreds of Marines and Sailors leaving the tents/frames were left behind. The tents were those old, green “US” gob’ment issue tents you’d see on the show MASH. Rather than use poles and stakes wooden frames with floors were used along with rocks scattered everywhere. Literally, everywhere you went in the living areas, you had to walk through gravel. Slipping, sliding and never having a sure footing can certainly get on ones nerves when the temp gets to 110+ degrees. So to “accommodate” so few people, we were all huddled together in one tent; and during the day we would break down the unused tents. At this time I was on nights and would come home around midnight, do my thing, and crash out. My “rack” (Naval lingo for bed…ugh), which was actually a cot, was located on the left side and the middle. Mind you, wooden floors w/boots, makes noise. Sitting or adjusting on your cot, makes noise. Everything you did made noise. So it was common courtesy to try and be as quiet as possible.

So there I was lying down on my rack, just chillin’ and not doing much else. I wasn’t asleep and I wasn’t tired. I could hear someone walk in and go past me. I didn’t think much of it until a few minutes had passed. I realized I didn’t hear anyone sit down, or walk out. So I sat up, turned on my flash light and aside from those guys already asleep, no one was sitting or standing on their bed.  Nothing had changed and there was no one new in the room.

This next story came second hand, and also took place at the same airbase in Kuwait. It came from a friend/co-worker whom at the time I had known for about three years. We had also deployed to Afghanistan in 2001 just a few weeks after 9/11. So I felt I could always trust him.

So the living areas, MWR, phone tent, movie tent, etc… areas were covered and aligned. Although they were separated in the middle by a big open space (again no fun having to walk through all that gravel) with living tents/shower trailers on one side, and everything else on the other. He was leaving the living area and had started to make his way across the wide open area when he saw an “Iraqi” fellow (for lack of a better term) walking perpendicular to him and along the open area. The reason this comes as odd is because all the “nationals” who would the grounds maintenance were always guarded/accompanied by military personnel. Always! So being at night and seeing this guy it caught his attention.

That’s when he looked down and didn’t see any feet. This guy, or thing was just openly cruising down the wide open path having no feet on which to do so.

Expect to hear more from Pete as he shares with us more of his encounters. Thanks again, Pete!

If you have a personal encounter you’d like to share on iNTO THE FRAY, via the blog or on the show…feel free to use the contact page here on the website, or email me at shannon@intothefrayradio.com