One of my favorite TV programs is American Pickers, where the two presenters visit ‘collectors’ with a view to buying their old junk (sorry archaeological antiques). The majority of the collectors are men who literally fill their homes, garages, lofts, basements, outhouses and acres of land with old advertising signs, cars, motorcycles and anything that will rust or rot. Even though they’ve had their collections for decades there is no chance they’ll ever restore them to their former glory or even get them into some kind of order. You would think they would be pleased to get a few dollars for their treasures, but like their very close cousins the hoarder, it is often very difficult for them to part with the smallest trinket.

This touches a nerve with me as for a very long time I’ve collected UFO and paranormal books, magazines and files. They have the sneaky ability to find room in any unoccupied space until they take over your home if you’re not careful.

I’m not as bad as some ufologists who have accumulated thousands of books, but it is still a problem. The thought of letting these hard won collections go is difficult, but if we don’t do something with them they’ll end up in a skip after we’ve met the grim reaper. 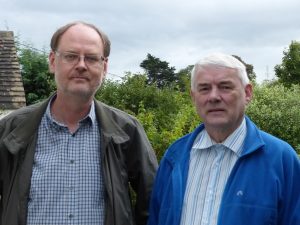 Clas Svahn and his colleague Carl-Anton

Selling is an option, although it depends on who the buyer is and if they will do anything useful with the material. The solution is to give it all to an archive. A few years back I gave copies of my Scunthorpe UFO files to the local library, which I thought was safe until someone told me that the library had been flooded and the files were destroyed. That was a case of bad luck and since the 1970s it has been a dream to set up a national archive of UFO research.

Whilst we have only discussed the concept, Clas Svahn has helped establish and run the Archives For the Unexplained based in Norrköping, Sweden. He regularly visits ufologists all over Europe to collect and preserve their works for future generations of ufologists and academics. The objective of this non-profit foundation is also to support, promote and conduct UFO research, and to stimulate a critical, scientific discussion about UFOs.

Using twelve locations in Norrköping, the archive houses over 30,000 books and as many periodicals. The library includes 2,000 cases collected by the Swedish armed forces since 1946, and collections of the late Hilary Evans, William Corliss and Gordon Creighton the former editor of Flying Saucer Review, and literally boxes of books provided by Peter Rogerson in Manchester and the founding father of Fortean Times, Bob Rickard. They have also obtained material from the USA, this year they were able to ship three pallets of material obtained from the California based Borderland Sciences Research Associates, who took an early occultist interest in flying saucers.

When the truck loads of boxes arrive in Sweden a team of volunteers painstakingly sorts and catalogues it. This is an amazing project that has managed to preserve huge chunks of ufological history and research that provides a valuable resource for anyone interested in UFOs and all aspects of the paranormal.

Needless to say they are always on the lookout for more donations of UFO material and anything else related to paranormal and Fortean topics.

More details about their activities can be found on the Archives For the Unexplained website.