October: The Gateway to Tradition

As the summer heat begins to fade and the sun is hanging lower in the sky, our minds begin to contemplate the changing of the seasons. Traditions of old dance around through our thoughts as the leaves on the trees start to sway and gain their first hints of color. One morning you awake to find the air cooler and brisk while delicate leaves flutter to the ground just outside your bedroom window. There is a change in the air and atmosphere as October arrives beckoning all that follows and hints quietly to the winter that lurks in the distance. For now let us disregard the ice and snow and rather focus our attention on this special time of year. A time that brings on its wings the scent of baked goods and warm drinks at any time of the day. A time for evening strolls and conversation regarding the excitement of transition from one distinct season to the next. As we welcome October with candles lit and the scent of the first year’s burn in the fireplace let us explore this time and come to appreciate the meaning and connection with this most beautiful and welcoming time of year.

While there are traditions that endure throughout the world Halloween and the celebration from which it derives its origin so well defines our vision of October and all that it offers. All Hallows Eve finds its roots some 2,000 years ago in the Celtic tradition known as Samhain (“Sah-win”). While the exact origin and tradition is now lost to time there are good accounts that speak of it being a time of gathering at the end of the harvest season. This was a time to account for and trade goods to prepare for the brutal onset of winter. Among these ancient traditions of survival and stocking goods it is believed that Samhain was also a time to honor and communicate with the dead. While this is a common belief it is important to note that no correlation has been established with Samhain being either directly or indirectly associated with the dead. All indications seem to point to the fact that the intent of Samhain was an observation and preparation for the changing of the seasons. An event that would have been paramount to the Celtic tribes at the time, as failing to prepare properly for winter could be the difference between life and death.

While the well-established celebration of Halloween has become a staple of culture in the United States the mysterious and intriguing month of October has much more to offer from cultures and traditions from around the world. Each offering their own interpretation of this transitional month and the influence it has.

While October 31 st marks a night of child sized ghosts, ghouls, and vampires lurking about in the streets of suburbia seeking tasty treats in the United States, further South in Mexico the celebration of El Dia de los Muertos (Day of the Dead) is just getting underway. October 31 st marks the beginning of this three day traditional festival that is intended to honor and remember those loved ones who have passed to the other side. This festival is vibrant and colorful and is akin much more to what we in the United States would envision as a Mardi Gras environment. The celebration is marked by the symbols of death with a special emphasis on the skull. There are baked goods in the shape of skulls as well as various candies, cookies and other similar treats. While the atmosphere of the three day event is one of celebration it is also taken very seriously by many as it is a time of vast importance in paying respect and communicating, honoring and remembering loved ones. 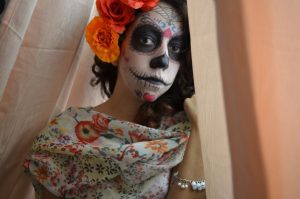 While this mostly European holiday falls just one day after October it is still celebrated in a fashion that is worth mentioning as part of this exploration of autumn tradition. All Saint’s Day is on November 1 st and is immediately followed by All Soul’s Day on November 2nd . Again with this holiday we see a reverence for those who have passed on to the other side. In this case it is a celebration of the pantheon of saints that have lived and died serving the Catholic Church. All Soul’s Day is a recognition and celebration of the faithfully departed loved ones of Catholic faith. While Catholic mass is observed on All Saint’s Day, All Soul’s Day is a time of visitation to cemeteries and for feasting with family and loved ones. This holiday is considerably more somber than the Halloween experienced in the United States but still lends itself to the time of year that is the focus of this exploration.

All over the world various holidays are observed in and around October that essentially share the common thread of reflection, honor, and remembrance of loved ones. While each culture has its own way of expressing these traditions it is important to note that there is a worldwide unification during this special time of year. While in the southern hemisphere spring is coming to life in October it is still a time of international celebration. While October is thought of and mostly remembered by the celebration of Halloween it is much more than just a place holder for this holiday. October is a symbolic and powerful season of life that we all must transition through. We must recognize this transition and learn to embrace it as part of our heritage. Rather than seeing October as a sign of the winter coming, we as cognizant souls and energy must learn to see ourselves as we see the seasons and realize that just as the spring brings renewal, each year that passes brings new life, hope and wisdom. So let us see October as more than just a passing of time but as a symbol to the traditions and experiences that help us to recognize and remember those special times that define us at the end of our days.

Images free use and via Pixabay.com

On the Track of the Ultimate Bigfoot Movie: “The Legend of Boggy Creek”

On the Track of the Ultimate Bigfoot Movie: “The Legend of Boggy Creek”