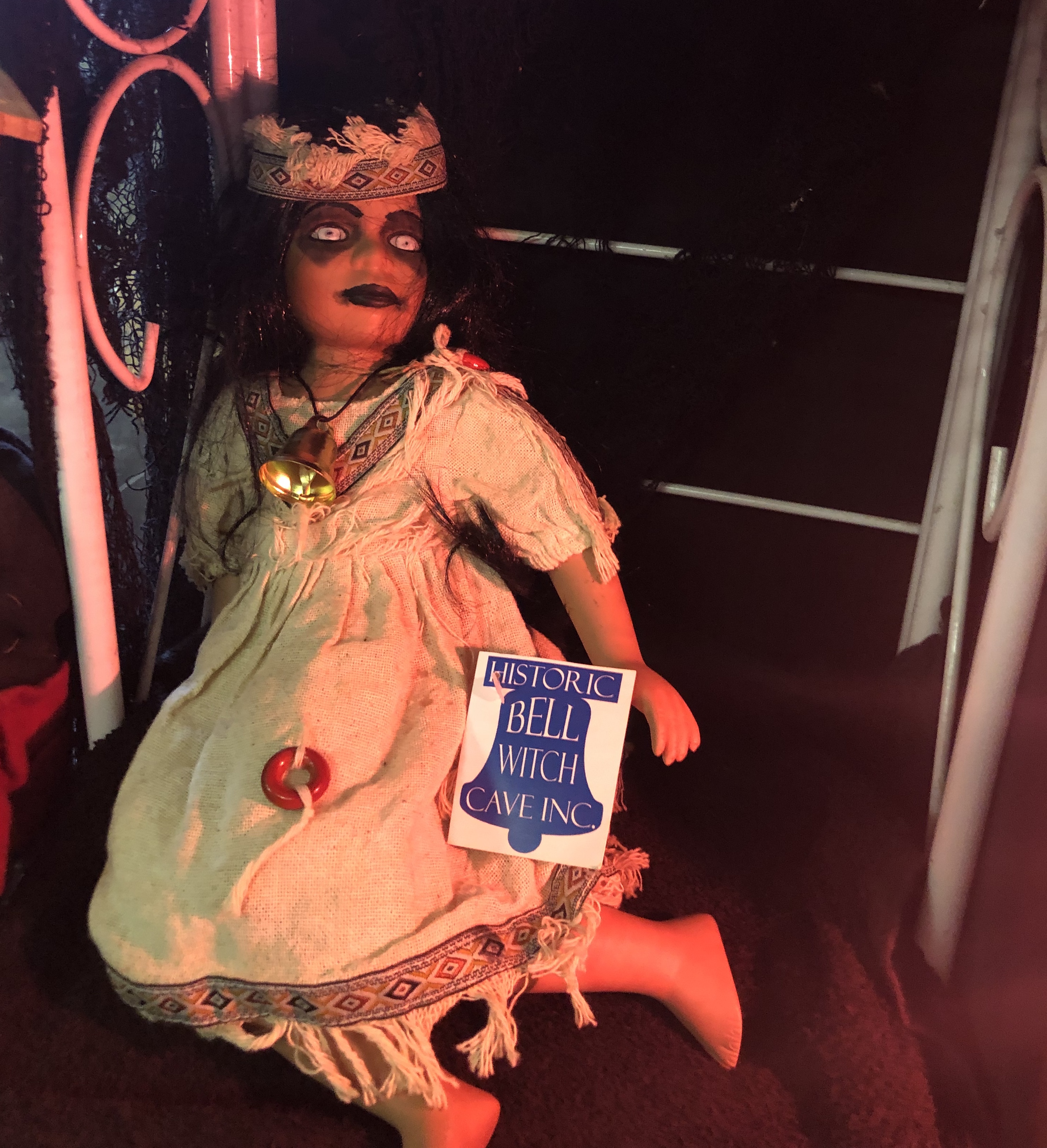 On April 13th I visited Moundsville, West Virginia for the first time. After a wonderful tour of the old West Virginia Penitentiary (which has quite a gruesome and terrifying history) and a stop at the Grave Creek Mound directly across from the prison, I found myself at the old Sanford School. This former school houses a handful of businesses, but I was only there for one of them: The Archive of the Afterlife.

The Archive houses haunted and cursed artifacts and curios from all around the world. The collection ranges from an execution cap to a funeral mask originating from the western region of the Republic of the Congo. I was taken aback by the number of items to be examined, but one piece immediately caught my attention: a doll. To be clear, the Archive of the Afterlife is home to many spooky looking dolls, but the one that I was drawn toward was a porcelain doll with a painted face. She had a small metal bell around her neck and a tag was still attached to her dress, denoting her place of origin: The Bell Witch Cave. Immediately my heart skipped a beat, as the Bell Witch legend has always been one of my favorite topics.

I asked the owner of the museum, Steve Hummel, the story behind the doll. Fortunately for me, the doll had been sent to him just a few days prior, accompanied by a letter from her former owner. The letter was written by one of John Bell’s descendants who had visited the Bell Witch Cave the previous summer. The owner felt that the doll, Blossom, would be better suited for the paranormal museum in Moundsville as the family was tired of all the bites and scratches that they had received since bringing her home from Tennessee. Steve explained that when he first came in contact with the doll, he felt the item was very charged and had a chaotic energy to it. Apparently, Blossom had been sent to the correct place and is quite at home with the other haunted and cursed items in the Archive.

A few weeks later, my family and I drove down to Tennessee to visit the Bell Witch Cave. I cannot say enough positive things about the time I spent in Adams, and I was fortunate enough to have the owner of the cave, Chris Kirby, as a tour guide that day. Chris sells porcelain dolls that she has painted to have disturbing features, dozens of which are displayed on shelves in the back of the gift shop. She was thrilled to know that one of her dolls found its way to the Archive of the Afterlife in Moundsville.

Also on display within the gift shop are letters which serve as warnings against taking rocks from the cave. These letters outline various misfortunes that befell those who dared remove something from the grounds. One letter, written over a year prior to Blossom’s arrival in Moundsville, discusses a series of disturbing occurrences that followed the purchase of a particular porcelain doll. This letter writer opted to return the doll to the cave in hopes that the events would cease if the doll was back home. There is no follow-up letter indicating if this was successful.

Prior to our cave tour, my children were perusing the gift shop. My four-year-old was drawn to the dolls and was insistent that she bring one with her into the cave. After explaining to her that they were porcelain and taking one into a rocky area would not be the best for the doll, she patiently waited until our tour was finished. She broke away from the group as we were leaving the cave, however, with her older siblings running after her, moving as quickly as they could back to the gift shop. By the time my husband and I caught up to them, my youngest was sitting on a bench inside the shop, cradling one of the dolls. The girl running the gift shop looked highly concerned when she saw me and immediately started explaining that she had tried to convince my daughter to pick another doll. As I stood there, she started showing her other dolls that were painted similarly and dressed in like fashion. My daughter refused to consider another. She said this one had to come home with us.

Before we bought the doll, I wanted to know why it was so concerning that my daughter was attracted to it. Apparently about a week before we visited the cave, that doll fell from its display. Several visitors and some members of the Kirby family were in the shop when this happened. This porcelain doll was the only one that fell from the highest shelf, tumbling nearly 6 feet straight down to the hardwood floor. The doll was somehow unscathed, and she was moved to a lower shelf, which ultimately made her closer to the eye level of my four-year-old when we arrived a few days later.

In the end, I decided that if my daughter wanted that exact doll, then perhaps the doll chose her in some roundabout way. All should be fine. We brought her home, and she was quickly named Sasha. My other children want nothing to do with the doll, but my youngest still favors her and approves of her new location: on display in our dining area. I purchased some items to accompany her for a nicer exhibition, one of which is an orange battery-operated candle that sits near two other white candles I already owned. Nothing strange has happened aside from that orange candle turning on and off by itself periodically. Overall, I think she has found her home here.

Note: As I was editing this blog post, my 4-year-old asked me what I was writing. Upon hearing I was writing about Sasha, she gave me a rather stern warning me not to publish this article because Sasha does not want anyone afraid of her. Sasha apparently told her that she would “mess up the house” if I ever wrote anything too scary about her. I guess we shall see! 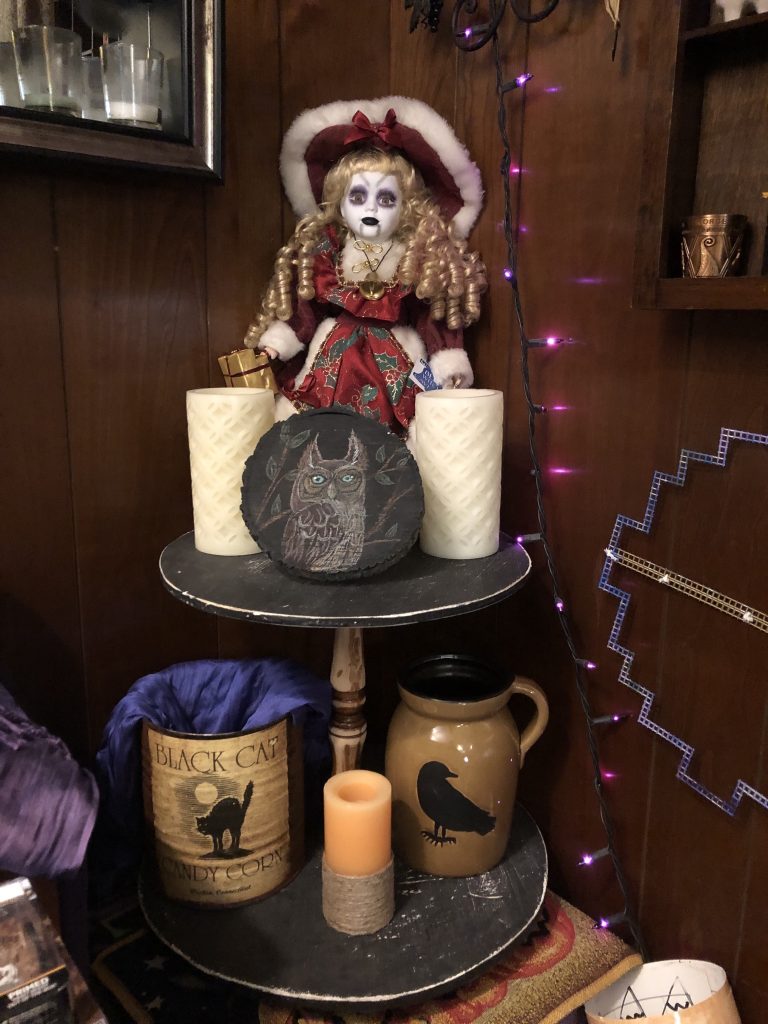 Sasha in our home, near her favorite orange candle. 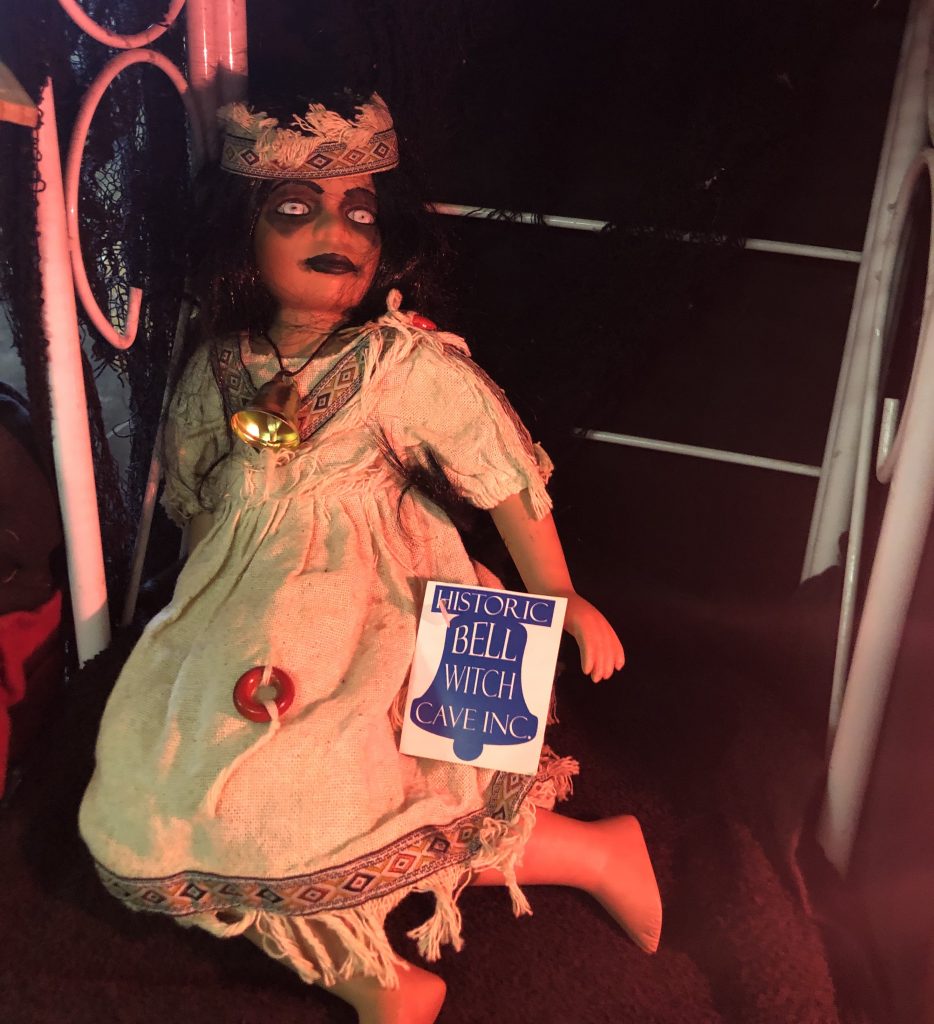 Blossom in her new home at the Archive of the Afterlife in Moundsville, West Virginia