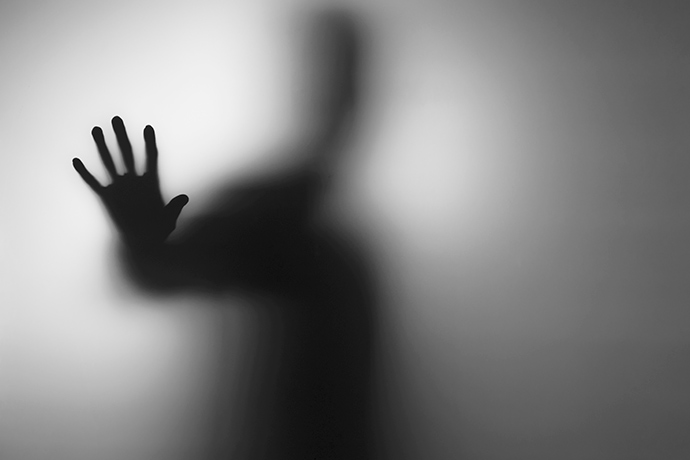 I would like to share the story of a night I was depressed and how that dark state of mind seemingly called on something ghostly and sinister.  This seems to be a reoccurring theme  throughout my life.  When something frightening, depressing or overwhelming happens, it brings on paranormal activity.  Not every time thankfully, but enough times that I am cautious when life’s road gets a little rough.

This particular story took place in an apartment complex I lived in up until six years ago. This complex has four buildings with three floors in each building.  Each floor has 12 apartments.  This apartment complex was built in the mid-seventies to help house all the new people in search of jobs at all the coal mines that were opening up.  To break it down, there are 144 apartments that have been occupied for four decades.  Can you imagine what kinds of stories these buildings would tell if they could talk?  Imagine all the deaths, abuse, and so many other things that have happened over the years.  I believe that kind of history leaves an imprint on the apartments.  It’s like an echo of  the darkness and negativity and it circles around until it finds a way to reveal itself.

I was and still am a single father to the coolest kid I’ve ever met.  We moved into our apartment soon after my divorce around the time my son was two.  That very first night we stayed there, I heard unexplained noises.  Apartments are noisy by nature with there thin walls and inconsiderate neighbors.  However, the noise I heard was footsteps coming from above my bedroom.  That would have been fine except that we lived on the third floor and there was no way anyone could have been above us.  We lived there for ten years before finally moving and noises like that became a normal part of living there.  I would hear the faucet in the bathroom turn on occasionally or cabinets in the kitchen open and close.  I would see and feel the carpet press down as if an unseen person was walking across it.  Sometimes I would hear yelling and screaming from apartments I knew were empty.

The night of my story was a Sunday.  I had to work early Monday morning, so my ex-wife came and got our son Sunday afternoon.  I hated seeing him go.  Every time he left, I felt his absence and it made my heart ache.  My son was all I had.  This particular night, my separation anxiety was a lot worse than it usually was.  I was depressed and the more I thought about it, the worse it got.  The truth is, my thoughts turned a lot darker that night than they normally did.  I thought about giving up on life and I wondered if  my son would even care.  I was depressed but these thoughts were uncharacteristic for me.  I tried watching a movie to lift my spirits but that didn’t help.  I played video games and had a couple beers but again, I couldn’t shake that dark feeling.  So  I went to bed, hoping a new day would bring on a new state of mind.

As I lay there in the dark, watching videos on my phone, I heard one of those unexplained noise coming from my son’s room.  My bed’s headboard was against a wall I shared with his room.  Outside of my bedroom door was a short hallway and if you walked out and turned left, his bedroom door was right there.  I paused the video and listened for a moment but didn’t hear anything so I continued watching the video.  Again I heard a noise but this was louder and there was no doubt it came from his room.  I heard the noise through the wall and it carried into the hallway outside my bedroom.  Thinking he may have left his bedroom window open, I got out of bed to check.  As I was reaching for the light switch I heard a bang loud enough that it sounded like it vibrated the wall between mine and my son’s room.  I did would any rational person would do under those circumstances; I went back to bed, pulled the covers over my head, and wished for instant sleep.  Truthfully, I don’t think I was in the right state of mind to deal with something like this.  I was too depressed and just wanted it to go away.

As I lay there, clutching my phone and eyes tightly shut, something banged against the wall in my son’s room.  It was a hard enough hit that my headboard vibrated from the impact.   “Shit shit shit,” I whispered under my breath.  “Go away.”  I started feeling a chill on the back of my neck when I know something negative is nearby.  The apartment was silent after that but the chill stuck with me.  I knew whatever it was, hadn’t left yet and even though I wished for immediate sleep, I listened intently for the next sound.  Moments later I heard the squeak of a lose floorboard that was at the threshold of my son’s room.  That’s the sound you hear when someone is stepping out of his room into the hallway.  By this time, my back was to my bedroom door (which was open), my blankets were pulled up over my head and the pillow was over my head as well.

I heard shuffling footsteps in the hallway and then another moment of silence.  That’s when I felt the sense of being watched,  The atmosphere of my room instantly changed and I knew something was just a few feet away looking down on me.  I didn’t hear breathing but I sensed subtle differences in the air as if something was behind me quietly moving around.  That’s when I felt my bed move slightly, as if someone had stepped on the carpet right next to my headboard.  That was it for me.  The oppression I felt from it’s presence added to my fear sent me over the edge.  I started yelling “Go away!  You are not welcome here!  Get the hell out of my house!”  I continued to lay there hoping for sleep.

I opened my eyes feeling like I had slept.  The clock said it was close to three in the morning. My room felt lighter and I didn’t hear any noises.  I pulled back the covers and rolled over onto my back and that’s when I clearly saw a man standing at the foot of my bed staring at me.  Before I could process what I was seeing, I jumped out of bed and turned on my light.  I then proceeded to turn every light on in my apartment.  Only then did I feel brave enough to go back to my bedroom and see if he was still there.  Of course my bedroom was empty.  The man I saw had a beard and long hair.  Looking back on it, I guess he looked like Jesus in a way.  However, I was agnostic at the time and his image truly meant nothing to me.  I didn’t feel oppression like I had the night before but I also didn’t consider it much before I jumped out of bed and turned on the light.

My son and I moved soon after and those few final months didn’t show much for activity.  I was relieved to get away from that place.  I haven’t had any real depression since that crazy night and the townhouse we live in now is great.  I’ve noticed small activity here and there when I’m sick or having a stressful day, but there’s nothing sinister about it.  I haven’t been back to those apartments and have no plans of ever doing so.  To me, it’s no doubt that places like that are sponges soaking in all the darkness and oppression.  All they need is a conduit to help release its energy.  I wonder what story was behind the presence my depression called out.  Then again, maybe it’s better not knowing.

Thanks to Sean for providing a photo of the complex where these events occurred.