An essay by Sir Winston Churchill considering the possibility of life elsewhere in the Universe, has recently been rediscovered at the Churchill Museum in Fulton, Missouri. In the 11-page essay titled ‘Are We Alone in the Universe?’, written in 1939, he muses:

‘I, for one, am not so immensely impressed by the success we are making of our civilisation here that I am prepared to think we are the only spot in this immense universe which contains living, thinking creatures, or that we are the highest type of mental and physical development which has ever appeared in the vast compass of space and time.’

These ideas must have returned to his mind in 1950 when he gave permission for his top scientific advisor, Sir Henry Tizard to set up a Flying Saucer Working Party. This had five top ranking members from the intelligence branches of the Ministry of Defence, War Office, Admiralty and Air Ministry and when necessary was able to consult with Fighter Command and the Meteorological Department. After examining several UFO cases they took advice from the CIA’s chief scientist, H. Marshall Chadwell to fall in-line with the US policy to debunk sightings.

‘When the only material available is a mass of purely subjective evidence it is impossible to give anything like scientific proof that the phenomena observed are, or are not, caused by something entirely novel, such as aircraft of extraterrestrial origin, developed by beings unknown to us on lines more advanced than anything we have thought of.’

They noted that it would be pointless and expensive to conduct a nationwide look out for UFOs, and recommended ‘very strongly that no further investigation of reported mystery aerial phenomena be undertaken, unless and until some material evidence becomes available.’

When fighter jets were scrambled to intercept flying saucers swooping over the White House in the Summer of 1952, the subject became a hot topic again. Prime Minister Churchill was led to ask:

‘What does all this stuff about flying saucers amount to?

‘What can it mean?

On 9 August 1952, the Air Ministry informed Churchill that their view of the subject had not changed since their 1951 report and that UFOs could be explained as, known astronomical or meteorological phenomena, misidentifications, optical or psychological delusions, hoaxes and note:

‘The Americans, who carried out a similar investigation in 1948/9, reached a similar conclusion.’

Unfortunately, the pilots of the saucers ignored these statements and made a reappearance the following month. The headlines reporting UFO sightings by RAY and Royal Naval personnel led to the Government to enforce the Official Secrets Act, because:

‘The public attach more credence to reports by Royal Air Force personnel than to those by members of the public. All reports are therefore to be classified confidential and personnel are warned that they are not to communicate to anyone other than official persons any information about phenomena they have observed.’

More surprisingly, way back in 1912 Churchill was embroiled in a mystery about stange craft in the sky. On the night of 14 October 1912, it was rumoured that a Zeppelin flew over Sheerness, Kent, at 8 p.m. When Mr Joynson-Hicks the M.P. for Brentford, asked about this rumour in the House of Commons on 18 November 1912, the First Lord of the Admiralty, Winston Churchill, supplied this written reply:

‘I have caused inquires to be made and have ascertained that an unknown aircraft was heard over Sheerness about 7.00 p.m. on the evening of 14 October. Flares were lighted at Eastchurch, but the aircraft did not make a landing. There is nothing in the evidence to indicate the nationality of the aircraft.’

Even though no specific airship, German or otherwise, was unambiguously identified as the visitor to Sheerness, Churchill still boldly claimed to the Committee of Imperial Defence:

‘There is little doubt that the airship reported recently to have passed over Sheerness was a German vessel, and this incident had renewed anxiety. Some form of overhead protection would have to be provided for magazines and guns against airships designed and supplied.’

At a later meeting, The Second Sea Lord, Sir John Jellicoe stated that a German Parseval-type airship had flown over Sheerness. When Mr Asquith, the Prime Minister, asked for evidence to support this claim, Jellicoe said that on the previous day to the incident, an airship had left Germany. This was probably a reference to the L.1. Zeppelin. Churchill supported him by saying that other sources confirmed that a German airship had been responsible.

One theory is that this so-called Sheerness Incident was hoaxed by popular aviator Grahame-White and Churchill to show how vulnerable Britain was to the German Zeppelin threat.

‘I don’t buy the theory that it was a conspiracy by Grahame-White and Churchill. Partly because such subterfuge seems out of character for such relentless publicity-seekers as these two were (I can imagine Grahame-White taking part in such a stunt but he would have soon enough revealed his part in it), but mostly because no actual evidence has ever surfaced, despite the vast amount of research done on Churchill since then. And if Churchill was in on it, why wait for a month before drawing attention to the incident?’

Whatever the cause of that sighting, in the following year, thousands of people throughout Britain claimed to see the lights of the mysterious German Zeppelins at night surveying the towns and countryside.

In response to this nationwide airship scare, the Home Secretary Reginald McKenna rushed through Parliament the Aerial Navigation Act 1913, which gave permission to the authorities to shoot down aircraft in prohibited areas. Many of these prohibited areas were located where the ‘scareships’ had been seen, so it was perhaps an attempt at reassuring the public that something was being down about the aerial threats from abroad.

Those who wanted more vigorous action were quick to point out that Britain did not have the weapons or resources to actually enforce these new regulations. At least the Act had the impact that Churchill would have loved, of making us aware of what might lurk in our skies, whether it be enemy invaders or aliens from outer space. 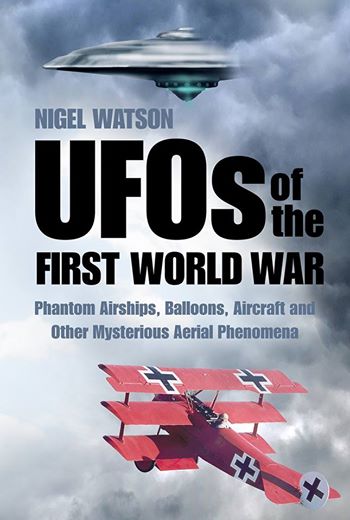