Aliens, UFOs, Sex and the CIA 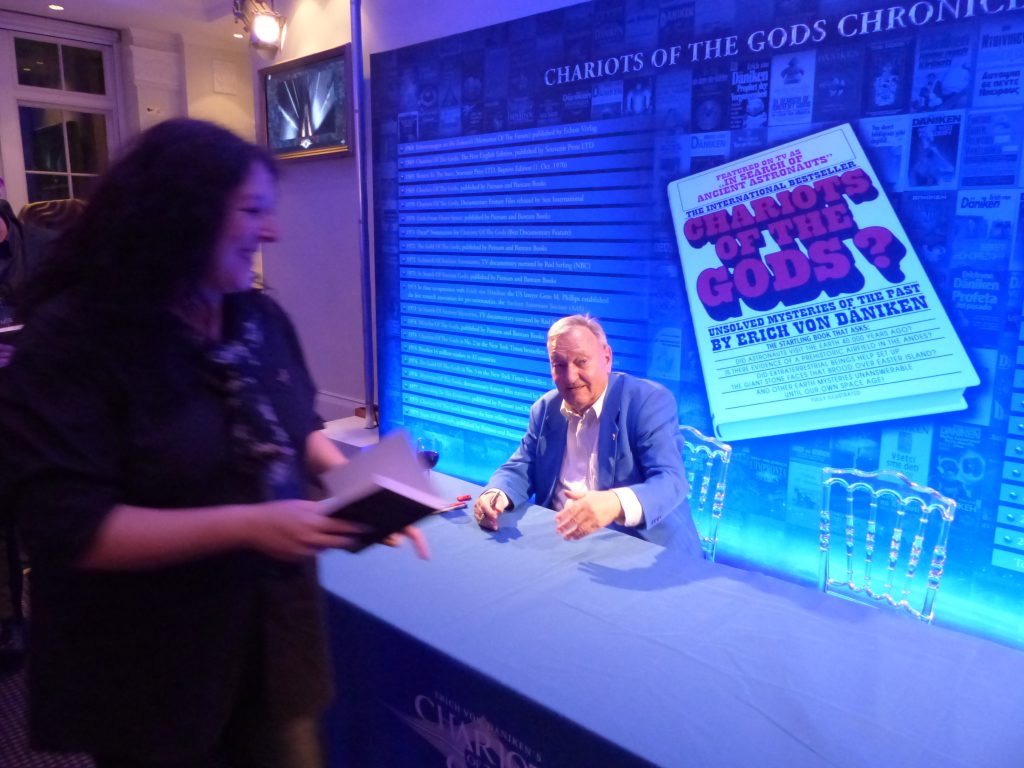 A survey of 1,200 people in Panama, found that those who had a UFO sighting were more likely to have an increased sexual appetite rather than fear after the encounter. 37% had a greater sexual drive, 17% had a feeling of fear and 38% felt nothing in particular. Most of these witnesses saw flying saucers rather than any other shape of UFO, and 61% of the total survey said they’d rather not meet an alien.

Perhaps the anxiety and wonder of seeing something exceptional in the sky arouses the witness and accounts for these survey results. Some might claim that randy aliens are deliberately sending out beams that will stimulate witnesses so that they can have their wicked way with them.

The concept of breeding with aliens is nothing new. Erich Von Daniken the author of Chariots of the Gods, in a two hour presentation at the Princess Anne Theatre, Bafta, London on Saturday 15 October 2016 said such events extend back to ancient times:

“The E.T.’’s know about us because we are part of their DNA. The Bible speaks of the daughters of men having intercourse with these visitors, and many worldwide myths and legends repeat the same story. These stories always say the E.T.s will return to us.”

Erich thinks this could be in the next twenty years.

By the 1980s alien abduction researchers in the USA accepted that women are routinely abducted, impregnated and then re-abducted a few weeks later for the extraction of the hybrid foetus. These activities explained the short-lived pregnancies experienced by female abductees. As for male abductees, they either claimed to have had intercourse with an alien woman or their sperm was extracted by mechanical means by the aliens.’

The case of Antonio Villas Boas is also outstanding. He claimed in 1957 that he was dragged inside a flying saucer and forced to have sexual intercourse with a beautiful alien woman. When he left, she pointed at her stomach, at him and then at the sky, implying she would have his child somewhere in outer space.

In 1978, UFO critic Rich Reynolds had a couple of telephone conversations with someone who can only be named as ‘B.N.’ He was a Department of Defense translator, who said that from 1956 to 1963 he worked for the Agency for International Development (AID) in South America. He claimed that the CIA ran an Operation Mirage that simulated UFO events. Whilst based in Sao Paulo, he said he was sent by military helicopter, crewed by US Navy men, on a psychological testing operation. Using the Brazilian/American air base at Serro do Espinhaco, they made reconnaissance flights over several days. One night using heat-seeking equipment they hovered over a man in a field. After spraying a chemical called Lorazepam, they landed and dragged the man to their helicopter. When being taken into the helicopter, he was groggy and he banged his jaw on the ramp of the craft. B. N. remained outside the helicopter with two other AID members and the three crew members, whilst a doctor a US Navy man and a Brazilian navy officer attended the man. After two hours, at 3 AM, the man who was still unconscious, was taken out of the helicopter and placed next to his tractor. This episode obviously related to the abduction of Villas Boas. B.N. went on to claim that many similar operations were conducted in South America and England.

B.N. went on to say that the CIA ‘terminated’ ufologists who threatened national security, that ufologist Dr. Hynek attended CIA briefings, and that the Betty and Barney Hill and the Hickson/Parker, Pascagoula, Mississippi abduction cases were created by the CIA, using holographic equipment.

Reynolds was rightly skeptical about several elements of B.N.’s testimony. A person with a good reading of the literature could easily have invented this participation in these experiments, and the hitting of Villas Boas’s jaw on the helicopter ramp fits a little too neatly with his account of having a blood sample taken from his chin. When Reynolds tried contacting him again, he had no success, so B.N. might have been a hoaxer or really who he said he was. If the latter is true, it still does not mean what he said was correct, as he could have been spreading disinformation in an attempt to discredit leading ufologists (like Hynek) and to scare people away from ufology, lest they get ‘terminated’.

To some ufologists these reports and many other similar cases seem to indicate that the aliens are conducting a hybrid breeding program to create a race of super beings, for what purpose we can only imagine. Sceptics claim these experiences are likely to be the product of sleep paralysis, where people are unable to discern the difference between fantasy and reality during the period between sleeping and waking.

Whilst writing about this I came across this hilarious spoof video ‘sex with ufo aliens 1970s govt film’ warning of the dangers of different types of aliens: